It’s once again that time of the year to scare everyone with some creepy decorations. For October 31!

I mean who needs those expensive animated props when can create your own DIY body in a bag Halloween decoration?

When it comes to Halloween yard decorations, the dead body wrapped in a trash bag is an interesting Halloween prop to scare those trick-or-treaters.

Plus we can make good use of old through away clothes, newspapers, milk jugs, and soda cans to make some creative stuff out of them.

Later on, I’ll show you different ways you can use a fake dead body to transform your front yard into a creepy haunted house.

Let’s come to the point.

how to make a fake dead body for Halloween?

At first, look, making a fake dead body seems to be a daunting task. But believe me, it’s not that hard. You need to put together the materials according to the sections of the human body.

Starting with the head, you need something small and round-shaped item. The next part is the chest which should be broad. You can use those milk jugs or cardboard boxes you get from Amazon packages.

For arms and legs, you can use soda bottles, and cans as they are thinner compared to other body parts. I’ll explain each part in detail, first get the basic items.

How do make various sections of the body?

Take the styrofoam head or mannequin head to form the shape of the head. If you don’t have a mannequin head, you can use a large round-shaped plastic container. Put some newspaper balls around it.

Next, we have to work on the chest and torso parts of the body. The chest is the broadest part of a body so take two large plastic cans (large milk jugs or laundry bottles) as shown below. Tape them with duct tape.

Remember they should be smaller than the chest to form the torso. And add lots of newspaper or old clothes to fill the space. Keep taping all of them so they stay intact.

As we move down, keep adding smaller bottles, soda cans, and 2-liter soda bottles to form thighs and legs. Keep taping everything. As shown in the image.9

The foot is a bit tall, so put two bottles in a standing position. Now, most of the body parts are complete. It’s time to wrap up.

Lay the fake dead body on the floor. Take a large black plastic bag and put the body inside. Make sure the head remains in the right place.

In place of a black trash bag, you can also experiment with a clear plastic bag or shower curtain. Even a garden black liner from a hardware store will be fine. Spread some fake blood inside the plastic bag to give a bloody dead body look.

After putting the plastic bag use duct tape or a rope to tie on the neck, torso, and legs. If you still find some empty space, fill them with old clothes and newspapers. Your fake corpse is ready.

The best part of this dead body Halloween prop is its versatility. You can use them to decorate the front yard or hang them upside down on a tree. This is the best low-budget Halloween decoration you can do with recyclable items at your home.

How to use the stuffed body for Halloween Decorations

On a lighter note! I can assure you, that your neighbors will call the cops when they see the dead body wrapped in a trash bag lying in your yard. LOL

The best place for the fake dead bodies is in the yard. As shown in the picture, you can hang them in the yard near the cemetery. Add some ghosts and skeletons to make it more creepy.

Just hang it on the front gate and put a big caution sign, Beware! Do not enter!

Hook it on the front door

A very creative way to use a fake dead body is to cover it with a spider web and hook it on the front door as shown in the image.

Add a few tiny spiders and put up a wooden welcome sign. That’s it!

A giant spider trapped his prey

Again this is for the front porch, the fake corpse wrapped in a spider web hung upside down. A giant spider is put on top. Decorate the porch with more spiderwebs to complete the setup.

This can be a creepy and funny idea, the zombie dolls carrying a stuffed body. This is an awesome yard display for Halloween.

Skeletons came for the funeral

This one is hilarious, the two skeletons taking the dead body for the funeral ceremony is a fun Halloween decoration for the yard you definitely want to try.

Outdoor Halloween decoration of dead body in a spiderweb.

You can’t get rid of spiders! Here’s more, a spider web wall display with a fake corpse hanging does look scary. The predator is getting ready for the meal. Is a great DIY Halloween decoration for the outdoors.

The fake dead body forming a cocoon is attached to the entrance accompanied by spider webs and hanging ghost props.

If you find value in this post, please consider pinning the images to your Halloween decoration board on Pinterest. It really helps me to reach more audiences. Have you ever imagined what life would be after death? Lol, just kidding. Well, that’s… It’s finally that time of the year when you dress up to spook everyone. Halloween… If you’re hosting a Halloween party, you might be looking for the spookiest treats and… 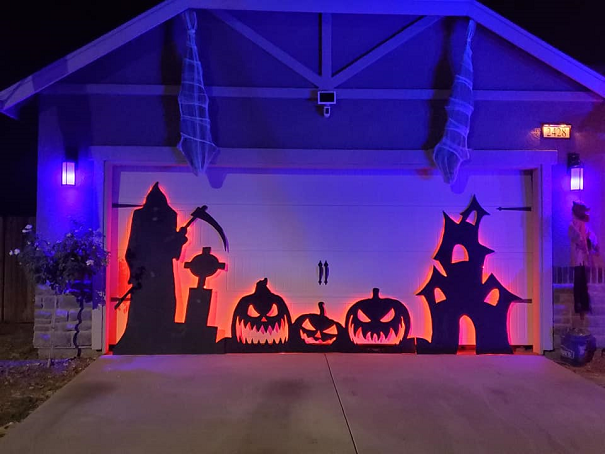 As the air gets cooler, the stage is set for Halloween. I’m sure you must…

Are you excited to welcome the trick-or-treaters this Holiday? Get your creative juices flowing with…

Halloween is the spookiest time of the year, it is also a great time to…

Amazon Affiliate Disclosure
As an Amazon Associate, I earn from qualifying purchases.